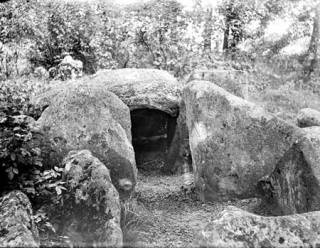 The other week I caught a documentary on Radio 4 by Stuart Lee about the mid-1970s children’s television programme Children of the Stones. Set around a stone circle that was clearly based on Avebury, it explored For a children’s drama it was surprisingly sophisticated and surprisingly scary. It was a programme I must have seen some of when I was young, as I recognised some of it when I found it on Youtube, although it was pretty deeply buried in my memory. I remember more clearly a similar series called The Moon Stallion set around the White Horse at Uffington. Again, the plot revolved around magic and dark powers. One scene that particularly stayed with me was set in the chamber of Wayland’s Smithy, where the children see a vision of a terrible things, including a mushroom cloud. Both were set in a part of the world I have a strong attachment to and involved prehistoric archaeological sites. This has got me thinking about those early formative experiences which archaeologists (and normal people) go through that grabs them and makes them interested in a particular period. Given my memory of these programmes I’m surprised I was never grabbed by prehistory (despite a brief flirtation with the Iron Age). For me, it was always Roman Britain and the early middle ages. For the Romans it was a visit to the exhibition about Pompeii at the British Museum in *the mid-1970s which kicked it off, combined with regular childhood trips to the Roman shore fort at Richborough in Kent. Subsequent nagging persuaded my parents to take me to other Roman sites, such as Fishbourne and up to Hadrian’s Wall. However, although this inculcated an enthusiasm for Roman Britain, my interest in the Roman world stopped more or less at Calais (where to be honest, it has remained). I never got grabbed by the wider Roman world. I loved Peter Connolly’s wonderfully illustrated books on the Roman Army and at the age of 7 I was convinced that the funniest thing ever on god’s green earth was Carry On Cleo, but I still cannot get excited about Classical Rome (there is something so dreadfully Victorian about it). I also remember distinctly the moment I got excited about the Anglo-Saxons – I was in infant’s school and we watched a school’s programme which included a series of dramatized episodes about Alfred and Guthrum – for some reason I was absolutely enthralled. In the months afterwards I recall drawing endless pictures of Vikings in breaktime, paying obsessive attention to drawing all the individual links in the chainmail. My school also had lots of copies by a series of novels about Vikings by Henry Treece, which I repeatedly read – there were also doubtless trips to the BM to look at the Viking stuff (I have very clear memories of the tremendous Vendel carved figure head that used to stand on the main stairs (maybe still does). I think the obsession was stoked by the inevitable adolescent flirtation with fantasy role playing and fantasy literature, although even at the time I found most of the fantasy literature pretty dire and was never swept away by LOTR. Instead, it was the writing of Susan Cooper and Alan Garner which was my particular favourite, undoubtedly because both Cooper’s Dark is Rising sequence and Garner’s novels were set in this world, but one where other dimensions rubbed up close. Both also drew heavily on Arthurian and Celtic themes; it was certainly through reading the Owl Service that I came upon the Mabinogion. About the same time there was also a BBC series The Legends of King Arthur. It was set in a fairly Dark Age-esque milieu – the knights all wore helmets clearly based on the Sutton Hoo helmet. It’s odd now, looking back as someone who spends their time thinking about the early medieval world, how far back the original seeds of this interest were planted. My daughter is now five and excited by Grace Darling, Florence Nightingale, wants a Playmobil knights castle (or pirate set), has a toy bow and arrow, but wants to be a ballet dancer. Odds on she’ll still be obsessed with at least one of these things when she reached forty, which I find rather pleasing.