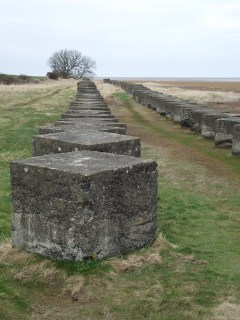 On recent episode of Radio 4’s obituary programme Last Word there were two individuals with connections with World War II.
‘Buck’ Compton was probably best known as one of the members of Easy Company, 101st Airborne whose war time story was turned into the successful television series Band of Brothers which followed their journey through the early days of the D-Day landings in Normandy through France and the Low Countries to the final days of the war to the east of the Rhine. The other person was the artist Leonard Rosamon, well-known for his work as an artist during World War II; his picture House Collapsing on Two Firemen, Shoe Lane is one of the iconic representations of the London Blitz.

It rather brought home to me, if I needed reminding, the extent to which the World War II generation is rapidly slipping away. In many ways it has been World War I that has been higher in popular consciousness recently. The final generation of veterans of the Great War have passed away over the last year, and the success of the book, play and now film War Horse and the book and tv series Birdsong have highlighted the horrors of the western front. This has consolidated the understanding derived from a thousand history lessons and GCSE set texts of the war poets.
Nonetheless,, I feel far more emotional on a personal level about the way in which World War II is passing into history as those who experienced directly are no longer with us. This is for a number of reasons. Partly this is a generational thing- personally, the passing of World War II generation is the passing of my grandparent’s generation, so it marks a profoundly personal transition as my own family’s shape and dynamic changes. Experiences and stories about the war are tied up with my own family relationships- I heard stories from relatives about their experiences on troop ships out to North Africa, loosing houses in the Blitz, watching the bombs fall on factories were partners were working, liaising with US troops in Somerset, and destroying bunkers on Heligoland. I grew up with pictures of grandfathers and great-uncles in uniform. Through this vicarious experience of the war (not to mention classic black and white war films), for me in World War II is still the war, my default image of what a war consists of. Although I was only 10 when the Falklands Conflict broke out, I remember being convinced that Britain would be bombed, because that was what war involved. I doubt if today, British ten year olds worry that the UKs latest overseas escapade will lead to mass aerial bombing of the UK mainland!

I’m also very aware of how visible the relics of World War II still are in the landscape. I grew up in in Berkshire, close to the Kennet Valley, one of the major ‘stop lines’ intended to halt the expected German invasion. The countryside was (indeed still is) littered with concrete pillboxes, it is only now I live in Yorkshire I realise how unusual this is. Now I live in Yorkshire I realise that these parts of my childhood landscape aren’t found across the country. However, up here, there are other reminders of the war. My daughter’s school was badly damaged by bombing and the local hall wherthe she went to playgroup had a memorial to the civillians killed when nearby houses were destroyed during the same raid. In town, in the Betty’s teashop there is a mirror onto which Canadian bomber pilots had scratched their names. The fields near where my wife grew up were used as a decoy site to attract the Luftwaffe from the city centre. Even doing my fieldwork in Northumberland, it is easy to stumble across reminders of the war. The broad flat sands of the North Northumberland coast were believed to have provided ideal landing beaches for German landings – I realised when I was driving around there last week that I was back in a landscape of pillboxes and I parked up by the line of concrete tank blocks that lines the coast near Holy Island.