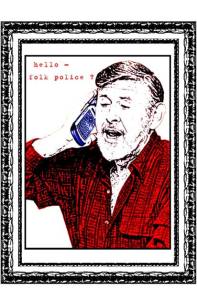 Last weekend’s Guardian had a fun piece about the music favoured by dictators and political villains (Robert Mugabe is apparently a fan of Cliff Richard whilst Mahmoud Ahmadinejad favours Chris de Burgh). However, there was little bit of the article that mildly pissed me off. Amongst the pantheon of bad hats and loonies was Nick Griffin,who apparently is a fan of (and I quote) “that most arthritically white of genres”, English folk music including ‘nu-folk poster girls Eliza Carthy and Kate Rusby’. According to his blog Griffin finds it ‘”an alternative to the multi-cult junk played incessantly on Radio 1″

First of all, a slap for the journalist for that lazy bit of stereotyping and secondly a slap for Griffin (I don’t think I need a reason for that). I’m sure they’ll both be pleased to hear that Eliza Carthy is currently touring in the band Imagined Village, whose members include a sitar player, one of the country’s leading dhol drummers and an overall line-up which is about 50% ‘non-indegenous English’. I saw them live in Leeds at the Irish Club on Tuesday (I’ll post a review soon). Pleasingly the band had also picked up on the article and videoed the entire audience flicking the Vs at Griffin and shouting “bollocks”; they are doing this at each venue on the tour and will be editing it all together and putting it on there website as a suitable rejoinder to the BNPs attempt to get into folk music.

Does this matter in the big picture of things? Well, lets face it, I don’t think that all Nick Griffin needs to do to make the elusive electoral break-through is to profess an appreciation of Steeleye Span and The Wurzels; nor, I suspect, will the SSuporters of the BNP be particularly dismayed that a bunch of weirdy beardy folk fans don’t like them. I still think its important though to try and attempt to resist Griffins/BNP attempts to annexe English folk music, history, archaeology and other things close to my heart in his rather half-arsed attempt to create a volkish image of an indigenous national culture which he is trying to use to contest his (mis)-understanding of the multi-cultural society we actually live in. So, if shouting “bollocks” to Nick Griffin and his nasty little party are what we have to do, then so be it!