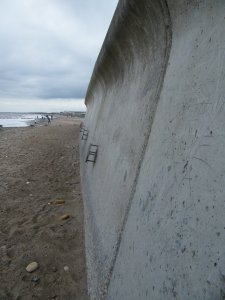 Last week we took the nipper down to Hull to visit The Deep (an excellent afternoon out for all those who love combining looking at fish with colossal sensory overload). Afterwards we headed out east into Holderness, the slice of land that lies in between the Humber estuary, the Wolds and the North Sea. This part of Yorkshire feels very like East Anglia, with its low-lying wetlands, shallow coastlines and insistent presence of the North Sea. One of my favourite parts is Spurn Head which juts out into the mouth of the Humber, and has a vaguely post-Apocalyptic feel, and reminds me of places like Dungeness, combining raw nature, ruins and traces of industry. At Spurn you can watch waders feed on the mud flats whilst in the background the lights from the petrochemical factories at Immingham twinkle on the other side of the estuary.

Like much of the east coast, Holderness has been in a constant struggle with the sea. Estimates vary, but its reckoned that between 3 and 4 miles of land have been lost to the North Sea since the Roman period. Villages with evocative names such as Frismersk, Orwith Fleet, Ravenser Odd, Dimlington, Hoton and Turmarr amongst others have all disappeared since the Middle Ages. South of the Humber many other villages have slipped beneath the waves, perhaps the best known being Dunwich in Suffolk, once a thriving coastal trading town, but now largely consigned to the sea (not to be mistaken of course with the Dunwich which appears in the works of HP Lovecraft…). I like the idea of these missing villages and towns lying beneath the waves of the German Sea These are the last traces of the land bridge that once linked Britain the Continent. Along the west coast of Britain, there are myths of other drowned lands, such as Lyonesse (off Cornwall) and Cantre’r Gwaelod (in Cardigan Bay), but, as far as I know, the lost villages of the East coast have never stimulated similar legends. Although there have been fantastic archaeological and geomorphological projects to map these drowned lands, of the North Sea, I like the idea of mapping the lost histories of these drowned villages. It would have to be an entirely speculative and creative exercise, certainly not something rigorous or methodological; perhaps more like a collaborative work of fiction. Something else for the ‘to do’ list.