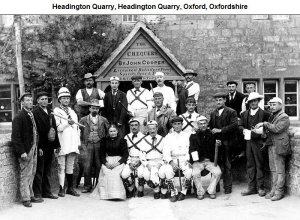 Back to the blog after the festive season (and two weeks nose to the grindstone working on the book). Anyway, something popped up in the news in the New Year which caught my eye/ear/eyes (delete as applicable). Apparently, morris dancing is under threat. This is something that seems to come up fairly regularly (and it would help the case a little if The Morris Ring who were behind this piece of publicity allowed women to dance!). However, morris still appears to be in fairly rude health, both in terms of numbers and dare I say it artistically. Few would deny that the morris tradition was heavily resuscitated by the folk song movement in the early 20th century (Cecil Sharpe and others of that ilk), but it is a genuine living tradition, and there are dance sides, such as Bampton and Headington (see picture above) which have an unbroken history back into the mid 19th century and probably earlier. The numbers of dancers is at a good level, and crucially young (and I mean younger than me) dancers are still taking it up. Sides like the more arty/performance based Morris Offspring and the more traditional but still ballsy Dogrose Morris show that morris needn’t mean accountants flouncing with hankies (you can see Dogrose Morris on Jools Holland later here).

Its also important to remember there is a lot more to English traditional dance than the traditional morris dancing (the Cotswold/Oxfordshire tradition); there is also border morris found along the Welsh borders, which has its own distinct dances and costumes (including painted faces) and rapper/sword dancing from Yorkshire and the North East – the latter with a traditional costume based on the work clothes of 19th century miners. Not all traditional dancing was based round team dances; there is also a tradition of solo clog dancing (I think this is mentioned in Ronald Blyth’s wonderful book Aikenfield)