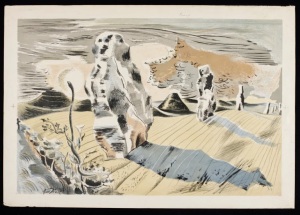 “On a still moonlit night Avebury seems peopled by ghosts, and the old church and cottages of the village seem new and insignificant.” John Betjeman

Amongst my haul of Christmas goodies I got a couple of DVDs – the 1970s children’s tv series Children of the Stones and a set of BBC Christmas ghost stories from the 70s. The latter included Stigma, the first modern ghost story to have been filmed for these series. Both Stigma and Children of the Stone are set in and around the stone circle of Avebury in Wiltshire and involve the interplay between the past and present articulated through and by the stones themselves. Pleasingly a key plot element of Stigma is based on the true discovery of a medieval man buried or crushed beneath one of stones, which nicely brings together the deep prehistoric past, the medieval past and modern life. Crucially, the fact that people still live among the stones is central to the conceits of both programmes. Prehistory is shown to inhabit the present day.

I’ve been intrigued how these very 1970s engagements with the Neo-Romantic aesthetic contrasts with how the Avebury stones were portrayed by major artists in the 1930s and 40s. The key figure here is Paul Nash– one of my favourite artists and one who inhabited the grey area between English surrealism and the Neo-Romantic school of the late 30s and 40s, although he was a little older than the key figures in both traditions. He has been called a ‘green surrealist’, which is a term I like.

He first came to Avebury on a visit in 1933 and took a series of photographs showing the stones. He clearly had a very strong response to the site. He wrote:

“The great stones were then in their wild state, so to speak. Some were half covered by the grass, others stood up in the cornfields were entangled and overgrown in the copses, some were buried under the turf. But they were always wonderful and disquieting, and, as I saw them, I shall always remember them ….. Their colouring and pattern, their patina of golden lichen, all enhanced their strange forms and mystical significance.”

Although in this passage he talks about the process of time covering up the stones, he does not mention the presence of the village that overlies the Avebury Henge. His emphasis on the natural world and suppression of the modern world can be seen in another passage

“’Last summer I walked in a field near Avebury where two rough monoliths stand up, sixteen feet high … A mile away, a green pyramid casts a gigantic shadow. In the hedge at hand, the white trumpet of a convolvulus turns from its spiral stem, following the sun. In my art I would solve such an equation.’

Interestingly, he visited at a time when the stones were being restored and the vegetation cleared. He met Alexander Keiller and they seem to have got on, though he later wrote ““Avebury may rise again under the tireless efforts of Mr Keiller but it will be an archaeological monument, it will be as dead as a mammoth skeleton in the Natural History Museum” – he seems to have been very antipathetic towards the impact of the modern world.

His visit and his photos went on to form the basis for a series of paintings based on Avebury – Druid Landscape, Landscape of the Megaliths , the Circle of Monoliths, Nocturnal Landscape and most abstractly Equivalents for the Megaliths. The interesting thing about these pictures is that they entirely ignore the built environment of Avebury, the village, the manor house and the church. Instead he strips back these accretions to present a purer vision of the stones. He is focussing on them almost entirely in terms of form rather than in terms of their human dimension. The only hint of human activity is in the presence of plough furrows that run up to (and under?) one of the monoliths in Landscape of the Megaliths.

Nash was not the only painter of this period to paint Avebury. John Piper was also very interested in prehistory- indeed he had written a short spread in the art magazine Axis about aerial photography of prehistoric sites. In his paintings of Avebury, he too pushed away the village, although he didn’t entirely excise it like Nash did. In his painting Avebury Restored the tower of the church is just visible in the background. In another meditation on prehistoric Wiltshire he showed Avebury and the Avenue, but the modern world only appears in the form of the skylined obelisk that is the Landsdowne Monument on Cherhill Down. I’m intrigued how Piper and Nash both seem to push out the modern (or indeed anything not prehistoric) in their depictions of Avebury- they seem interested in the deep past, but not in its juxtaposition with later periods. This lack of juxtaposition is surprising as it is this placing of the past against the present that is often seen as one of the defining aspects of 1940s Neo-Romanticism- one thinks of Eric Ravilious’s images of chalk hill figures, seen from seen from trains or behind barbed wire. In fact Myfanwy Piper (wife of John) writes of Nash in 1937 “He has no interest in the past as past, but the accumulated intenseness of the past as present is his special concern and joy”. I would contend though that there is surprisingly little evidence of this present in Nash’s Avebury work. It also contrasts with the folk-horror/uncanny sensibility of Children of the Stones and Stigma which seems to explore the past within the present and is might perhaps be seen as a very 1970s reworking of Neo-Romanticism for a nuclear age.

Postscript: Nash wrote “A stone walking over a field” on the back of one of the prints of the Avebury stones he gave to a friend- I like to think this presaged the Doctor Who story-line Stones of Blood, which is set on a prehistoric stone circle and has walking megaliths.