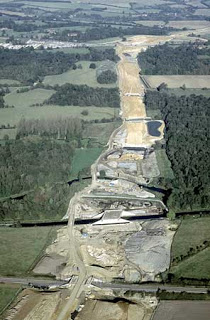 Honestly, you write a blog post and then before you know it, six months have passed and it’s time to write another! Couple of things caught my eye recently- most recently was the government announcing plans to revive a series of road building schemes that had been shelved, seemingly funded somehow by a combination of local authorities and commercial capital (because that kind of thing has worked SO well in the past…). This seems to be part of some kind of on-going CONDEM campaign to cause chaos in local authority planning departments. Combined with HS2 and the fantastic policy of kick-starting the economy by allowing people to build slightly bigger conservatories, this is yet another policy seemingly intended to cause immense levels of contention at local planning level. It is tempting to suggest, only partially tongue in cheek, that the idea is to cause massive problems in local government planning so that they then have a strong argument for removing planning from local authority control and centralising it in Whitehall. I did rather depressingly hear a Tory MP on Any Questions the other week talking about placing underperforming planning departments into ‘special measures’; exactly the same term used to for ‘underperforming’ schools which are now forced out of local education authority control and into ‘academy’ status, with a line of accountability that runs straight from school to ‘sponsor’ to Whitehall- conveniently cutting out all those tiresome local authority people and democratically elected councillors. As I understand it, this policy of hacking away at local authorities and replacing them with Whitehall is called ‘localism’. Anyhow, as an archaeologist, my hackles tend to rise and this kind of thing. On the whole, I tend to prefer not to see archaeological sites, historic landscapes, listed buildings etc destroyed – sorry, I’m just a bit funny like that. Indeed, another recent article in the paper that caught my eye was one that highlighted that 20 years have elapsed since the Twyford Down protests. This was the first of a series of environmental protests that kicked off in the early 1990s. The one that I saw up-close was the anti-Newbury bypass campaign- which saw the emergence of Archaeologist and Development as a pressure group. I well remember attending a rally at the site organised by the group. The trouble is, and very few archaeologists I think admit this, is that whatever the pros and cons of road construction (both in environmental terms and as an act of Keynesian economic stimulus), archaeology is just another subcontractor of the construction industry. Due to the way in which archaeologist sits within the planning system, we have a commercial archaeological sector that exists to fulfil the developers legal obligations to meet concerns about the threat to archaeological deposits. Commercial fieldwork units competitively tender for work and derive most, or more usually all, of their income from such contracts. We’ve seen this very clearly in recent years; the recession led to a collapse in construction and a consequent collapse in commercial archaeology, with extensive lay-offs and many businesses going under. If (and it is a big if) all these new road schemes go ahead, it will mean lots of jobs for those working in the commercial sector. Bad for archaeology but good for archaeologists – this is a paradox I’m not sure how to resolve. I am concerned for the environment and don’t want to see the damage wrought by the road building schemes, but I have many friends and colleagues who work in the commercial sector and for whom these kind of projects mean jobs. Which should take priority?