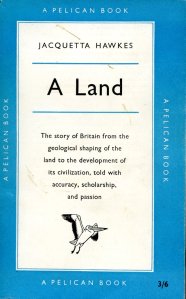 I’ve just finished reading Jaquetta Hawkes’ wonderful book ‘A Land’. Written in the late 1940s, it is a meditation on geology, archaeology and the development of Britain. Hawkes was that rare thing, an archaeologist who could write wonderful prose, in places coming close to poetry.

It is this immense antiquity that gives our land its look of confidence and peace, its power to give both rest and inspiration. When returning from hill or moor one looks down on a village, one’s destination, swaddled in trees, and with only the curch tower breaking the thin layer of evening smoke, the emotion it provokes is as precious as it may be commonplace. Time has caressed this place, until it likes comfortably as a favourite cat in an armchair, also caresses even the least imaginative of beholders.

Like many of the writers I’ve been reading recently, Hawkes takes an unashamedly (Neo-)Romantic view of the landscape; she quotes extensively from Wordsworth and illustrates the book with a sketch by Ben Nicholson . Like W. H Hoskins she looks back to the period between the end of the Middle Ages and before the Industrial Revolution as a ‘Golden Age’ of English landscape, and, again like Hoskins, she revels in the immense regional variation within the British landscape (though unlike Hoskins her perspective is truely British rather than English). It is a useful counterpoint to the other book I’m reading at the moment Matthew Johnson’s Idea of Landscape which emphasises the English landscape archaeology tradition in general, and (in Johnson’s view) its founding father, WH Hoskins, firmly in an intellectual tradition that stems from 18th century Romanticism (and Wordsworth in particular). He clearly dislikes Romanticism in all its form seeing it as the progenitor of (in his words) ‘dreary, dreadful, Victorin mawkishness’, and I think his aesthetic tastes (he prefers the salty, roaring, bawdy 18th century) are perhaps clouding his judgement of later writing and scholarship on the English landscape. Though perhaps I’m letting my preference for the Romantic and particularly Neo-Romantic vision of England cloud mine.

postscript: despite my preference for Romanticism I can’t stand Wordsworth (I blame A levels for this)